Makes about 6 servings, 1 1/2 cups each
Yum, yum, YUM! I got the idea for this recipe in part from a post on my friend, Mandy's, facebook page. Mandy is my super awesome friend who creates all kinds of scrumptiously delicious things in her kitchen. She's the kind of friend that drops off muffins on your doorstep in the morning or comes to visit you after you have a baby, brings a whole bunch of food, and then forces you to sit down and eat while she does your dishes or something.

Anyway, Mandy follows the Paleo Diet now and she posted a recipe for a Buffalo Chicken Cauliflower Casserole. I loved the idea of a casserole featuring veggies as the main ingredient but I didn't have any chicken and we are pretty wimpy about spicy things in our house. So really the only thing I took from the recipe was how to cook the cauliflower to start the casserole LOL. The end result was totally different but SOOOOOOOO good. Creamy and savory with a crispy parmesan crust.

I inhaled my bowl and the boys were equally enthusiastic. The baby started dancing in her high chair after the first bite and then growled at me if I put her spoon down for a minute to get my own bite. (If you want to see what she looks like when she is NOT growling, make sure to scroll to the bottom!) I will admit that the boys and I each had a piece of homemade whole wheat bread and butter with our servings (so no Paleo for us!) but it was only because the bread had just finished baking and we had been smelling it for an hour. We would have been more than satisfied with just the casserole. 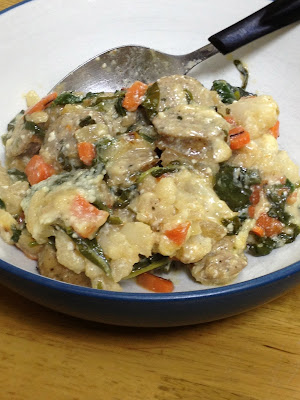 ONE: Preheat oven to 400. Dump the cauliflower into a large baking dish and pour 2 Tbsp olive oil over the top. Sprinkle with salt, nutmeg, and sage and stir well until all of the cauliflower is coated with oil and seasonings. Bake 30 minutes, stirring once in the middle, until cooked through and starting to brown.

TWO: While the cauliflower is cooking, throw the onion, parsnips, and carrots into a large saute pan with the remaining 1 tsp of olive oil. Stir well, cover, and cook over medium heat until onion is translucent and veggies have softened, about 10 minutes.

THREE:  Add the sausage and spinach and cook, stirring often, until the spinach has wilted and the sausage is slightly browned, about 4 minutes. (I used fully cooked sausage so if you are using raw sausage, cook it until the sausage is mostly cooked. You are going to bake the final dish so a little pink is okay.)

FOUR: Whisk the tofu and lemon juice into the chicken stock. (I used homemade chicken stock that had no added salt so I added 1 tsp of low sodium soy sauce to the mixture.) Pour it over the veggie mixture along with the shredded mozzarella and 1/4 cup parmesan cheese. Stir well and heat through until the cheese has melted, about 2 minutes.

FIVE: Add the sausage mixture into the baking dish with the cooked cauliflower. Mix well, breaking up any large pieces of cauliflower as you stir. Sprinkle the remaining 1/4 cup of parmesan cheese over the top and bake, covered, for 15 minutes. Uncover and bake an additional 5 minutes or until the parmesan cheese is bubbly and golden brown.

Have a question, comment, or suggestion? Found a really great deal? Wanna share an awesome recipe or tip? E-mail me at FreezeYourWayFit (at) gmail (dot) com. I can't wait to hear from you!