I was busy for a while cooking up something extra special :) Meet our newest little addition, Elowen Anthea Laurel. The other three kids are completely smitten with her and we couldn't be happier.

Every now and again I even get a chance to hold her. But it's usually when the other three baby hogs are in bed. That also happens to be when I do my blogging so please excuse my occasional typos as I am likely typing my posts one handed while nursing ;)

Makes about 10 tacos, 1/4 cup filling per taco
Have you seen the Lego movie? We LOVE it! It was rainy and dreary this weekend so I let the boys watch it. They mention Taco Tuesday a bunch of times and Colwynn suddenly says, "What's a taco?" I realized I have never actually made tacos for dinner since he was born. I used to make them once a week when it was just Matt and I. What could be easier? Brown a little meat, stir in the package of mystery powder full of chemicals, and serve on a deep fried and probably partially made of plastic taco shell. Needless to say, that's probably why I haven't made them ;) But tonight I threw a homemade version together complete with shells and a hidden veggie. The kids loved them! The quiet dinner of everyone eating happily was totally worth the AMAZING mess produced by a 7, 5, and 2 year old eating tacos :)

Since there is pureed spinach in with the meat the tacos are green. My family is used to a lot of their food being green so they didn't bat an eye but you could certainly omit the spinach if you don't want green tacos. My kids have no problem eating spinach raw, mixed in stuff, or in a salad but, the second I try to put it on a sandwich or in a tortilla or something, everyone complains. Even the biggest kid (remember when Matt actually requested I puree the spinach into the sloppy joes). So by pureeing it and adding it into the meat I can make sure that they are still eating a green veggie but I save myself all the whining. Then I eat mine with a big pile of spinach and feel extra good about my veggie intake for the day :) 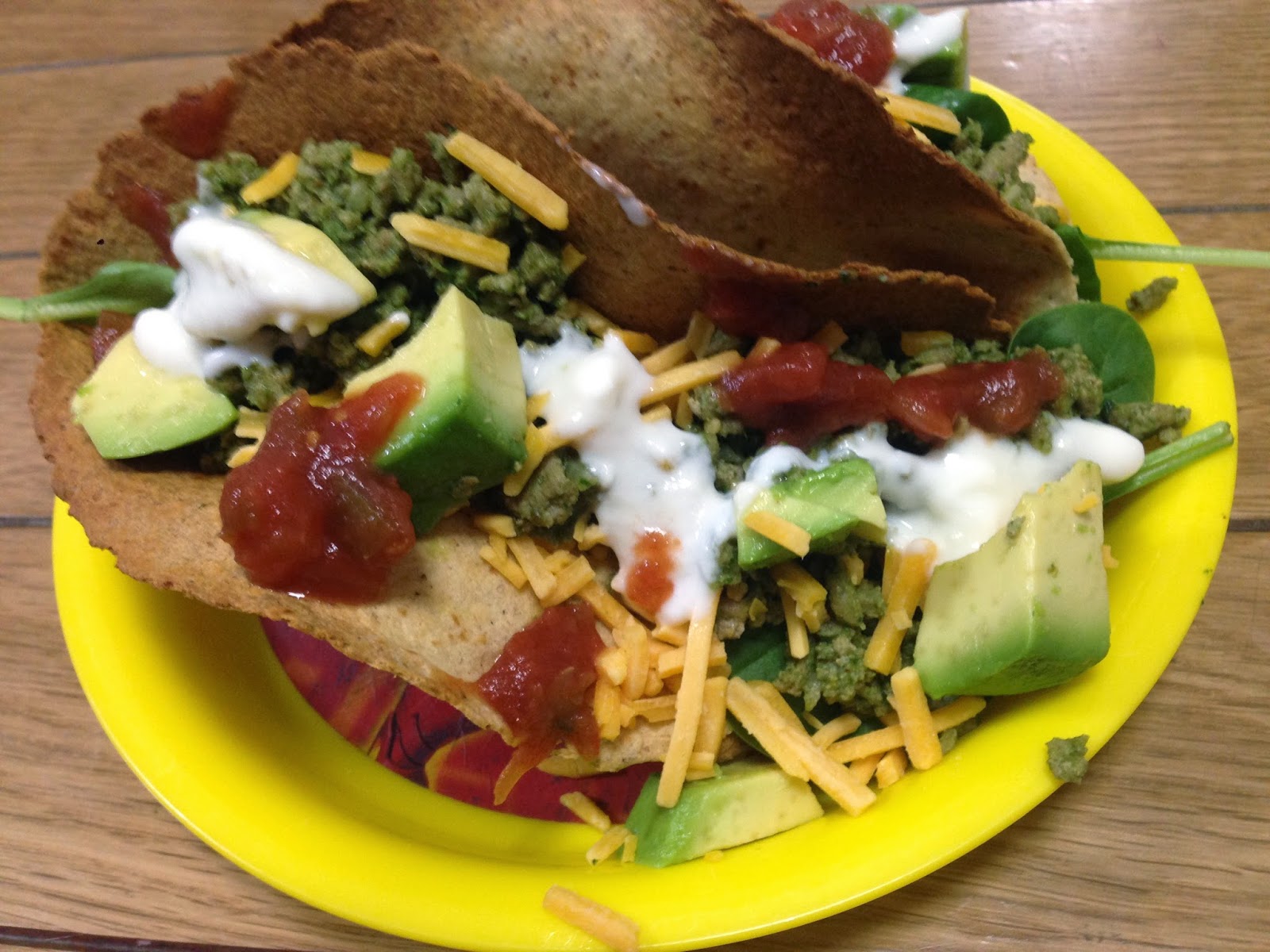 
Taco shells-
ONE: In a large skillet over medium heat, brown the ground turkey until no longer pink. Drain the excess grease.

TWO: Puree the spinach into the 1/2 cup of water and add it to the browned meat in the skillet with all of the seasonings and tomatoes and black beans if using. (Sometimes I don't feel like bothering with the mini blender so I just rip the spinach up into little pieces and throw it in as is. But still add the 1/2 cup of water). Mix well and continue to cook over medium heat until the sauce has thickened a bit, about 3-5 minutes.

To make homemade taco shells:
Turn a muffin pan upside down. Spray both sides of the tortillas lightly with cooking spray and wedge between the cups of the muffin pan so that they are standing upright and look like taco shells. Bake in a preheated 350 degree oven for 15-17 minutes until crispy and golden brown.

Have a question, comment, or suggestion? Found a really great deal? Wanna share an awesome recipe or tip? E-mail me at FreezeYourWayFit (at) gmail (dot) com. I can't wait to hear from you!